If you enjoy bunching up all your activity for long weekend workouts instead of squeezing them into shorter daily bouts, then there is good news. A new study suggests it doesn’t matter how often you are active, just that you are in the total scheme of things, at least when it comes to living longer.The study was published in Medicine & Science in Sports & Exercise. 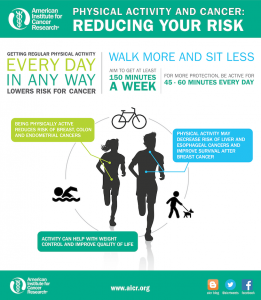 The paper found that people who were active just one or two times a week – dubbed weekend warriors – and those active more frequently all had similar lower rates of mortality among people who spent the same amount of time being active. And being moderately active, just over 37 minutes a week – even if it’s all in one bout – may be enough to lower risk of mortality compared to people who do less than that.

“The main contribution of this study is to show that it is important to be physically active when you can – specific patterns are not important; rather it is the total amount of activity that is important,” said I-Min Lee, MD, ScD, Professor of Epidemiology at the Harvard T.H. Chan School of Public Health and co-author of the study.

Research shows moderate to vigorous activity lowers the risk of many diseases, including cancer, along with improving physical and mental health.
It also links to living longer.

This study focused on mortality as opposed to disease prevention. AICR research clearly shows that physical activity protects against breast, endometrial and colorectal cancers, recommending people be active every day to lower risk. Government guidelines recommend that we aim for 150 minutes of moderate, or 75 minutes of vigorous physical activity a week, along with muscle-strengthening exercises at least twice a week.

This latest study builds on work published last year that also focused on activity patterns. That previous research suggested that men and women who were active once or twice per week had lower mortality risk when compared to those who were inactive. We wrote about that research here.

That study used self-reported data, asking participants to report how much and how long they were active. This new research uses data from accelerometers, a device that measures movement (the same technology in your phone that tracks steps).

The study included about 3,400 accelerometer-wearing adults who were pulled from the large National Health and Nutritional Examination Survey (NHANES). Participants were at least 40 years old when they joined the study.

After six and a half years, those who were moderately to vigorously active for at least 37.5 minutes per week had a 60 to 69 percent lower risk of dying during the course of the study. Similar risk reductions were seen among the weekend warriors when compared to those least active. About a third of participants here were inactive; another third were active throughout the week with weekend warriors making up the remaining third.

Overall, Americans fall far short of meeting recommended activity goals. Only about a third of the adults are getting the recommended 150 minutes of aerobic activity per week, according to a June government report. Fewer than a quarter meet the full physical activity guidelines, aerobic plus strength training.

The authors point out several limitations, including the fact that these findings might not be applicable to specific diseases. Accelerometers also cannot detect physical activity behaviors and they are not good at seeing certain activities, such as cycling and swimming. That means the amount of activities could have been underestimated. Because accelerometers only measure movement the study also might have missed strength-training activities.

Notes Lee: “The outcome studied is all-cause mortality. We would like to see additional research on other health outcomes.”